Note: This is part 1 of 5 of the original article published in the American Journal of Clinical Hypnosis – Volume 34, November 4, April 1992 by Michael Samko, Ph.D and Rod Windle, Ph.D 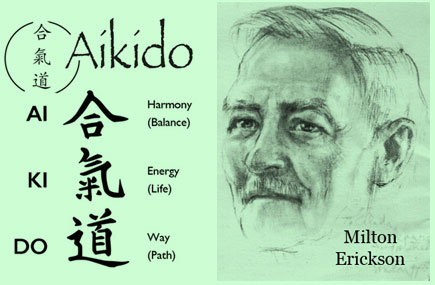 Background and Parallels of Aikido and Milton Erickson

Several key Ericksonian concepts find cross-cultural validation and practical application in the Japanese martial art of Aikido. The Aikido psychophysiological state of centering shares several important attributes with the trance state, particularly in the relational aspects of shared trance. In Aikido methodology for dealing with others, blending is an almost exact parallel to Ericksonian utilization. The Aikido view of resistance offers an increased understanding of strategic/Ericksonian approaches. Therapist training may be enhanced by combining Aikido principles with traditional methods.

The genius of Milton Erickson and his contributions to hypnosis and psychotherapy have been validated in many ways and from many diverse sources. From a childhood marred by illness and disability, Erickson pursued a medical career and used his limited mobility to develop and extraordinarily keen sense of observation. Drawing on his observed knowledge, he developed the utilization approach. He expanded treatment methods with pattern-interruption techniques and by his creative application of both client and therapist trance within the therapeutic interaction. These methods of resolving intrapsychic conflicts have close parallels with methods of an entirely unrelated system of solving conflicts: the martial art of Aikido.

The creator of Aikido, Morihei Uyeshiba (1883-1968), also had a weak and sickly childhood. He recovered to spend over half a century studying the ways of the warrior in Japan. The fruits of his labors he distilled into a new martial art; Aikido (AI = harmony; KI = life energy; DO = path), or ways of training, (literally, the way of harmony with universal life energy), a powerful, effective, and nonviolent method of self-defense and resolution conflict.

The defender takes his stand on the mat. He is relaxed yet alert. His hands are by his sides. He offers none of the exotic defense poses popularized by the movie and television action thrillers. An attacker rushes at him, but he remains calm and still until the last instant. There follows a split second of unexpected intimacy in which the two figures, attacker and attacked, seem to merge. The attacker is sucked into a whirlpool of motion, then flung through the air with little or no effort of the part of the defender, who ends the maneuver in the same relaxed posture. (Leonard, 1973 p. 17)

Aikido possesses an effectiveness that can appear to border on the magical. Attackers are often not even aware of how they have been thrown until they find themselves stunned, on the ground. During Uyeshiba’s lifetime many martial artists from both the East and the West challenged him, seeking to put this diminutive master to the test. By and large, they found they could not touch him unless he allowed it. One Judo expert, recounted, “His body was soft as silk when I first held it, and then with a short (shout), he moved ever so slightly and I flew off” (Takahashi, 1947, p. 7)

On the first view, the active and physically vigorous martial arts would seem worlds removed from the generally quieting activities of hypnosis and psychotherapy. However, Aikido shares essential similarities with Ericksonian hypnosis and therapy, when the two arts operate using variants of the same general principles. An understanding of one art complements and enhances knowledge and application of the other. The two systems developed in complete isolation from each other, in radically different cultures and on opposite sides of the world. This parallel development suggests a universality of certain key Ericksonian concepts that is neither culture nor application-bound.

Presented in Ericksonian terms, the core concepts that have direct parallels in Aikido are utilization of patient response, therapist trance or shared trance, and varieties of pattern interruption. Utilization is a core of Ericksonian therapy. It involves a sensitivity to, and cooperation with, a patient’s cognitive, emotional and behavioral patterns. Therapist trance is an interpersonal phenomena in which both patient and therapist are mutually affecting a trance state in the other, though the therapist retains control over his own trance state. Pattern interruption is the interruption or shifting of a patient’s predictable, automatic patterns of behavior or response. Gilligan (1987) explores each of these concepts in considerable detail.

The value of exploring Aikido’s application of these core principles lies in two main areas. First, Aikido’s training techniques are substantially different from those techniques used to train Western therapists, and there may be value in understanding how Aikido systematically goes about training practitioners. Second, Aikido provides a visual kinesthetic metaphor for utilization of resistance and pattern interruption. It is one thing to work with these methods in the mental realm, and quite another to watch them unfold physically.

This is part 1 of the series, see the other parts here: